And now for something completely different

Right, well after the success of the amazing Chase Park Festival, I now have to get back to my music story! (and overdue editing elsewhere etc, which will happen in time; procrastination time!?!) So here we go!:

Bit of family blarb, in that my Mam (that's 'mother' for those not familiar with some dialects!) is Scottish and she met my Dad when he was grafting where she’s from over 40 years ago – and as such across the years, my younger years, we visited a lot.

Tighnabruaich in Argyll, is when a kid, canny boring; when actually it is a truly beautiful part of the world. Things taken for granted when young!

Her Dad, my Papa whom I got on with very well was a funny guy and fantastic musician! He could make the accordion dance! Never played the bagpipes though...

It was said how “your Papa would love it if you picked them up”; so I did! I was about 10/11/12 I think and received strangely welcoming ‘likes’! (not being exactly a usual instrument to learn at that age) 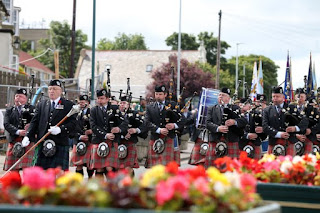 I learned with the City of , starting with a ‘chanter’ which is like a recorder, before progress on to the real pipes - big when you're a young'un!

When there, being part of the band, we played at all-sorts of events; from , Gateshead Garden Festival, marched from to , and competed!

One of these competitions was held in somewhere – can’t remember exactly – and to me and the band’s surprise I won!!! Big trophy was mine for a year; and I’m proud. Like them or lump them, I don’t dislike. I did however give them up (when I was 15 I think) for different (teenage!) reasons!