As of writing this blog – late again; I know – celebrating a small break in the sun on foreign shores, it’s been and gone as holidays do after returning home for a few days!

Ok, I saw an offer of a 3-night holiday in Cala Bona, Majorca at a very reasonable cost within my somewhat limited riches, so I put forward my interest to the responsible travel agent. Yes, it (the deal) was for 2 people, but at the cost I had to enquire having not been away since April 2015 (2 years). The ball was set in motion.

As I had seen the fantastic offer on Facebook initially and knowing that the agent (Leanne) was known and recommended by my sister Sharon, I did a/the/that tagging thing just for some thoughts…

Ideally in my mind (selfish?!) it would have been a perfect break for myself and my better half Sara, who works in a school, so holidays said no to that, but as it was an offer for 2, the booking went ahead anyway! What I did not expect was for Sharon to vest interest in the offer for herself and Chris (my brother-in-law) too, if logistics could be facilitated to allow their transfers to be from Gatwick not Newcastle; which was done!

So, about what, 6 weeks later it was holiday time and I got excited having never been to Majorca before, knowing that it would at least be hotter than the spring climes of Newcastle, and not knowing anything else about it really – part of the excitement! Sleep that night? 2 hours before my 3am taxi pick-up! Insomnia experience welcome?!

As you do in the airport, the check-in process (felt strange when asked about Sara’s absence) must be done bla bla bla and of course it was relatively early – I hate queueing for too long; sure no-one’s a fan but my little MonSter especially is not a fan, which meant my case got in fairly early too. You know what that meant! (1st on last off…)

I was sat with my headphones as company looking forward to the needed thrust to go and as Carmina Burana started playing exactly on take-off, it could not have been better timed! Brilliant! Better than my 1st ever holiday abroad to Lanzarote in 1994 as The Fugees “Killing you Softly with Me” started playing! (some things you don’t forget!)

2 hours 50 minutes later I landed at Palma airport after an enjoyable short flight; and to collect luggage. Remember ‘1st on last off’? Oh so true. But by then the rest of the holiday makers had disappeared and the Thomas Cook travel rep too. What bus did I need? I asked and asked… Aye, it could have been the way I was asking while showing the ‘Travel Document’, but. Anyway, by then Sharon and Chris were there as well so I went on their bus to the resort.

Protur Florita Resort was home for 3 nights self-catering accommodation. My room was surprisingly good in that I had no expectations what so ever. Bags dropped, into shorts and to the bar, as one does! It was holiday! 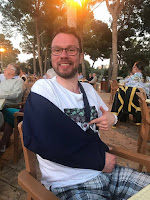 We didn’t venture far that first day. Well actually that is not true. See, my rarely worn prescription sunglasses were on but I couldn’t get used to them. Vision just didn’t feel right and unfortunately this was proven to be the case as I did not see a small (~2”) step and tripped, fell and hurt my elbow pretty badly. So, a venture to A&E was on – X-Rays and a sling later and back to the shack! #Holidaystory. Ahem.

That was the Saturday, and to the Sunday. I had something I HAD to see or similar (online commentary for example) somewhere, being Newcastle’s last game of the EFL Championship with the chance of becoming champions. Couldn’t not experience it somehow (not being at St. James’!) so I went to the British Bar as Sharon and Chris went exploring, as they do.

They weren’t showing the game (it wasn’t being broadcast) with relegation and play-off games having priority over us and Brighton as to who would be the champions! Howay! So, I sat in front of a large screen showing Sky Sports News, and Twitter #NUFC on my phone. I had a pizza and a couple of lime-sodas and we were 3 goals up to the good(!); but Brighton were by then 1 up and coasting (no pun) to be champions. I had grudgingly settled for what looked like a 2nd place finish with secured promotion. THEN Twitter went mad saying Villa (who were hosting Brighton) had scored. Brighton had to win their game! Doubting some previous false Twitter claims I double-checked and Villa HAD scored an 89th minute goal! Hadn’t had such a football rush for years! A pint of Estrella was on just as Chris and Sharon returned thinking Brighton were champions; I happily corrected them! Newcastle United FC EFL Championship Champions 2016/2017!!! YES!!!

And back to Majorca!

After I thoroughly enjoy that pint (we won! Did I say that!?!) we went down to the Harbour pub in Cala Bona and met a lovely couple with their lovely dog Tess, chatted and had a shandy. Then we went and got changed in preparation for some scran and had a fab dinner at Restaurant Son Floriana. The earlier pizza was a late lunch and a lining! To the beach bar and home to sleep. Champion(s!)! What a Sunday! 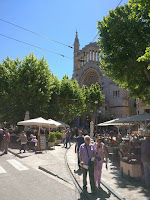 On Monday, we drove to Sóller. Quite a drive (Chris was the man at the wheel, it obviously wasn’t me and my sling) but it had been recommended as somewhere to visit and to get the Tram. We got parked, got an ice cream, then onto the tram to Port de Sóller! Beautiful! Bigger than I thought it would have been, but live and learn!

That night in my room, I was treated to a loud holiday soundtrack from the nearby bar, not so good if you’re trying for an early night for an early morning departure. My decision to have had a Tiramisu pudding was the stupidest thing I did being a non-caffeine taker! 1 hours sleep for me then!

And that was that! Thank you, Majorca, I hope to be back! 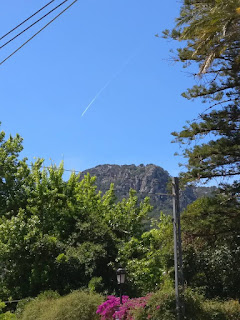 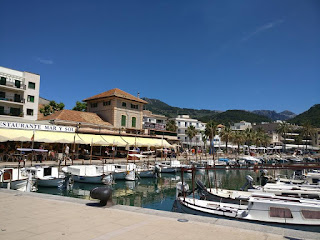 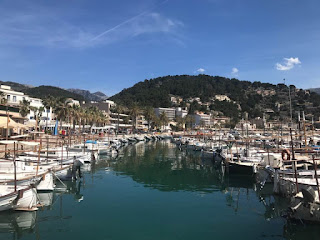 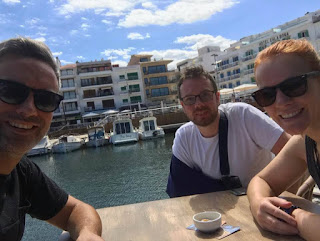